The Castillo de San Marcos – St. Augustine has a tradition of transnational encounters

In addition to an entire session devoted to “International Exchanges and the Development of Planning” chaired by Steven Ward (Oxford Brookes University) and including the following speakers and presentations: Jose Geraldo Simoes Junior (Mackenzie University) “International Exchanges in the Beginning of the Modern Urbanism: The ‘Relevance of the First Conferences and Expositions of Urbanism Held in Europe and the United States, 1910-1913’”, Nuray Ozaslan (Anadolu University)“The Idea of ‘International’ and Local Planning Actors for the Development of Istanbul in the 1950s”, Shira Wilkof (University of California, Berkeley)“From Europe to Palestine and Back: Transnational Planners and the Emergence of Israeli Planning Thought”, Noah Hysler Rubin (Bezalel Academy of Art and Design, Jerusalem) “Planning Palestine: British and Zionist Plans”, Haiyi Yu, Fang Xu and Hua Wen, (North China University of Technology) “Learning Foreign Experiences and Building Local Systems: Duality of Modern Chinese Urban Planning History”, many of the other sessions included papers with transnational themes.

Amongst these papers, there was a focus on examples from India. Kristin Larsen and Laurel Harbin (University of Florida) studied Albert Mayer’s influence with their paper “American Regionalism in India: How Lessons from the New Deal Greenbelt Town Program Translated to Post-World War II India”, Rachel Lee (Technical University, Berlin) concentrated on Otto Koenigsberger in “From Static Master Plans to ‘Elastic Planning’ and Participation: Otto Koenigsberger’s Planning Work in India (1939-1951)” and Ray Bromley (University at Albany – SUNY) presented a paper on “Patrick Geddes’s Plan of Indore: The Inside Story”.

Part of the transnational team involved in the planning of Abuja, Nigeria

Another geographical zone of transnational planning interest was sub-Saharan Africa, with papers by Tiago Castela (University of Coimbra) “Peripheries in a History of Urban Futures: Planning for the Government of Informal Spaces in Late Colonial Mozambique” and Rachel Lee (Technical University, Berlin) “Beyond East-West: GDR Development Planning Transfer – from Oil Presses in Ghana to the Master Plan for Abuja”. Examples of transnational planning from China included a paper titled “Richard Paulick and the Import of Modernism in China” by Li Hou (Tongji University), and Benyan Jiang and Masaki Fujikawa (University of Tsukuba) investigated the German and Japanese influences on green spaces in Qingdao – “Conflicts and Continuity: The Development of Green Spaces in Qingdao, China (1898-1945)”.

After 3 intense days of papers and roundtables, the IPHS conference went out with a bang with an “after party”, with music provided by the conference organiser Christopher Silver’s (University of Florida) rock band In Crisis. 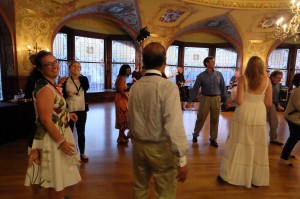 As well as the great papers and partying, thanks to Planning Perspectives editor Michael Hebbert (University College London), I was delighted to find a copy of the Appendix to the Volta River Project Report at Anastasia Books, St. Augustine. The Volta River Project provided the impetus for several transnational UN planning missions to Ghana (formerly Gold Coast) with team members including Albert Mayer and Otto Koenigsberger.

An unlikely find at a St. Augustine used bookstore

The abstracts of the abovementioned papers can be downloaded from the IPHS conference website http://iphs2014.dcp.ufl.edu/documents/Abstracts-IPHS2014.pdf and a revised version of the conference proceedings will be online soon.

In the laboratory and in the field: hybrid housing design for the African city in late-colonial and decolonising Ghana (1945–57)

This paper considers the case of late-colonial and ‘transitional’ Ghana (1945–57) to qualify the way in which ‘native’ dwelling practices were harnessed for housing design. Theories about the ‘colonial modern’ have underpinned the ambivalence of residential schemes and urbanisation strategies developed during decolonisation by modernist architects. Most documented among these is work in North Africa, with projects from Casablanca and Algiers taken as the epitome of how modernism memorably embraced the vernacular to amend its tenets in the early 1950s; however, British involvement in the colonies has more commonly been documented in relation to the tropical architecture canon, with a focus on institutional buildings rather than housing projects, especially in West Africa. Housing design, on the other hand, makes manifest the significance of the social and cultural dimensions as a basis for housing and urbanism during decolonisation in Ghana, downplayed to date because of a focus on climatic and economic factors. Projects by Fry, Drew, Drake and Lasdun, and by Alfred Alcock and Helga Richards, are discussed to gauge the extent of transcultural exchange while socio-economic surveys, experiments in building science and anthropological studies increasingly inspired the design process.

Scottish independence. Should there be an independent Scotland, or should Scotland remain an integral part of the United Kingdom? As the clock ticks closer to the proposed referendum on 18 September 2014, the debate rages on. Although the mid-twentieth century independence of West African nations took place under completely different circumstances, this article uses the present independence debate to re-ignite a discussion on Nigeria’s decolonization years, the attainment of independence and the architecture which emerged as a consequence. 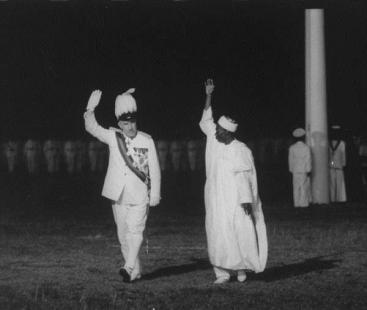 The clamour for independence and self-rule in West Africa gradually began after World War II.  This achieved its highpoint in 1957, when Ghana became the first African nation to attain independence and transit from colonial rule to self-governance. One feature which perhaps, became widely synonymous with the country’s drive for independence was the Pan-Africanist movement and the frontline role of Kwame Nkrumah, who later became Ghana’s pioneering president. However, a less referenced but equally important tribute to Ghana’s independence, were the architectural monuments which were constructed to commemorate the event. Chief among these is the Accra independence arch.

As with Ghana, self-governance calls had pervaded different levels of Nigerian society before the October 1 1960 independence date. The most prominent perhaps were those propagated through African edited newspapers like the West African Pilot, and which echoed the voices of native elites and politicians. Nigeria’s formal decolonization process however appears to have started with the 1945 promulgation of Richard’s constitution. Not only had this constitution granted greater levels of native participation in the legislative house, it equally paved way for the much sought after regional system of governance. Nigeria was therefore reorganized along political and administrative lines into a Western region with headquarters at Ibadan, a Northern region with headquarters at Kaduna, and, an Eastern region with headquarters at Enugu, while Lagos remained the Federal Headquarters. With this new organizational structure came the formation of regional houses of Assembly and the election of its representative members.

Of equal importance were the new parliamentary complexes being built to usher in the emerging era of self-governance, beginning from October 1 1960. The new buildings may therefore be described as some of Nigeria‘s most prominent symbols of transition to self-rule, and were indeed the ‘architecture of independence’.

Short Notice: but please do submit an abstract….

We are pleased to announce a call for papers for the second ETIC International Workshop:

Meeting Places: The City as a Space of Cross-cultural Encounter