‘I need 30 minutes to meditate before giving the lecture’ stated Balkrishna Doshi, ‘and a quiet room in which to do so, and, oh, some tea please’.

I’ve always been somewhat taken by this, my first (and only) meeting of Doshi. This was not the request of an architectural tyrant making petty demands, but an essential aligning of thoughts, removal of distraction, and focusing on how he might respond to the audience. It was a process he mirrored in his architectural work – bring forth a determined idea, eliminate any confusion and put the ‘audience’ or the ‘user’ at the centre. Doshi was in Liverpool to give a lecture to coincide with a Le Corbusier exhibition arranged as part of the European Capital of Culture year. The lecture covered parts of his biography such as his time with Le Corbusier in Paris (and surviving on a meagre subsistence) working on the monuments of Chandigarh, as well as his work with Louis Kahn at the Indian Institute of Management in Ahmadabad. Had his career ended there it would have been remarkable but he would go on to make significant advances in both formal and social aspects of architecture.

On 7th March Doshi was awarded the Pritzker Prize, the first Indian to receive the award, and we send our hearty congratulations.

Together with his studio he has designed well over 100 projects in the Gujarati city of Ahmedabad and many more throughout the rest of India. He has chosen to focus on India rather than developing an international portfolio of work, and he has contributed much to low-cost housing provision and town planning. 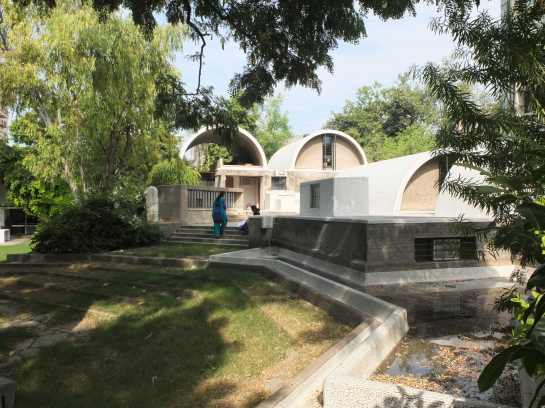 Ahmadabad, with its wealthy merchant class, has proved an eager patron of architecture and the city is astonishing for its quantity of bold design. They readily embraced Corbusier’s work and he received three commissions in the city. Doshi’s own work emerged out of this context. He wasn’t a mimic or somehow bound by Le Corbusier – on the contrary, he developed his ideas further and pursued the playfulness that is rarely discussed in Corb’s later commissions.

Working out of his self-built studios ‘Sangarth’ for the last 40 years, Doshi created a series of half-round concrete parasols clad with ceramic.  These vaulted spaces were quick to construct, eliminate complicated details and components, and offer flexible enclosures that can easily be extended. The vaults offer protection from the intense heat of the Gujarati summer as well as channeling the monsoon rains into a series of pools. The landscaping is equally important with large scale planting, shade trees, and a small amphitheatre carved out of the terrain. The campus is a lesson in how to design with care and beauty whilst minimising materials and maximising spatial impact. 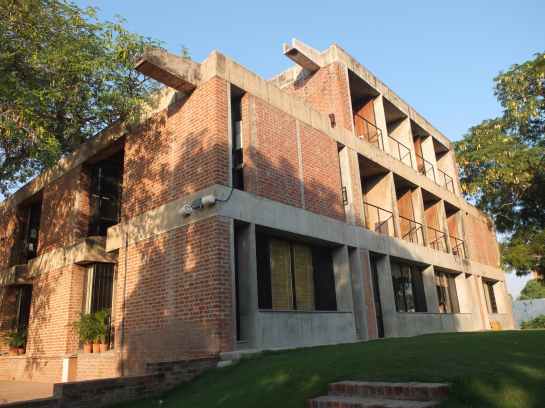 Although more sculpted and at a larger scale similar themes were explored at the Centre for Environment, Planning and Technology [CEPT].  Here there is an encouragement of procession and movement through the various structures and landscapes. Gathering spaces open up amongst the strong, yet simple brick masses. The climate here permits few enclosures and the building envelope is perforated and rarely defined. Wandering through the campus exposes the students to the work of others, and one stumbles upon critiques, exhibitions, models being tested, and class discussions. Circulation is no longer a corridor or a staircase. There are elements of Kahn’s IIM, but the CEPT campus is more compact, more urbane and less of a‘set piece’ than IIM – whilst both use the humble brick and deep shadowed reveals to great effect.

There are of course many more projects that we could discuss (see William Curtis or James Steele’s monographs for more on the work), but two that immediately spring to mind are Premabhai Hall (1972) and the Tagore Theatre (1963-65).

Premabhai was a brave project, situated in the heart of old Ahmadabad’s Badra, a large public square lined with historical works and old city gates. The theatre seems to leap up and cantilever out over the square.  It confidently dominates the space, rewarded for its quirky form, and the blank gables acting as a foil to its ornate neighbours. 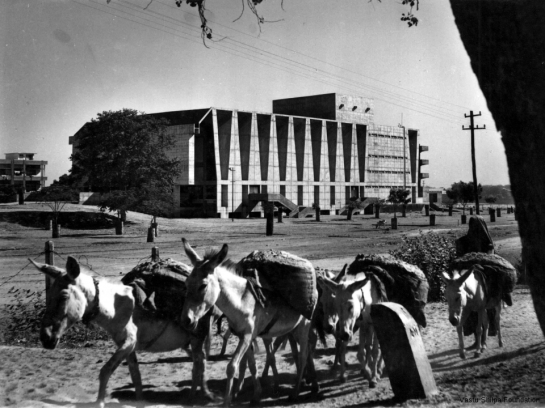 The Tagore Theatre is a rigid frame, folded plate structure, and achieves an impressive 33m span enabling the interior to remain free of columns (as well as containing all of the services). At first sight it appears too much  – the scale and lack of surrounding context makes for a foreboding approach. But the delicate folds of the concrete and precision casting seems to soften and give the theatre a more starched-fabric feel upon close contact – plus it’s impossible not to smile at the acoustic clouds that line the interior. 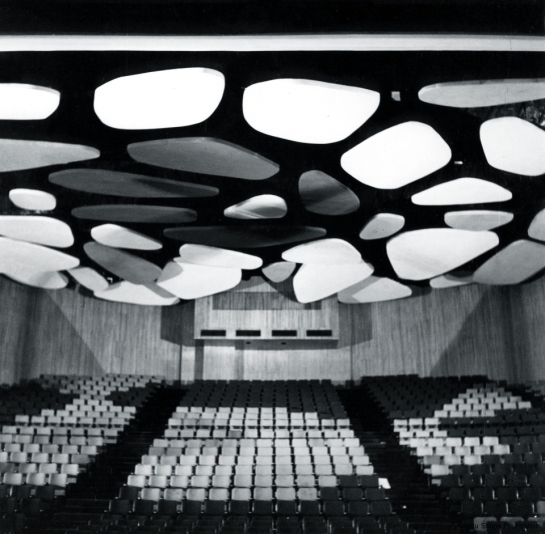