Escaping Nazi persecution, Otto Koenigsberger moved to India, where he set up the Hindustan Housing Factory, before it all went wrong.

This article first appeared on Scroll.in The refugee crisis that followed the division of India and Pakistan in August 1947 intensified the already dire housing situation in Indian cities. In Delhi, where the population had almost doubled over the previous decade, causing a severe housing shortage, some 500,000 refugees sought shelter. As well as camps outside the city, Delhi’s verandahs, gardens and pavements were filled with displaced people while communal violence raged in the streets.

The “noble mansion of free India where all her children may dwell” that Prime Minister Jawaharlal Nehru envisioned building in his Independence Day speech must have seemed a pipedream to Delhi’s homeless. Nonetheless, the central government committed to developing housing solutions that would provide dignified, sustainable, low-cost shelter to help counter the refugee crisis.

Responsible for leading this project was Otto Koenigsberger, Director of Housing in the Ministry of Health. Koenigsberger, who was born in 1908 in Berlin, Germany, had been working in exile in India since 1939. Unable to continue his work as an architect in Berlin due to Nazi persecution, Koenigsberger – who was of Jewish background – had migrated to Bangalore, where he held the position of Government Architect and Town Planner in the erstwhile princely state of Mysore for nine years.

In addition to his extensive government work in Mysore, he built up a private practice, working on large-scale urban planning projects such as the Jamshedpur Development Plan for Tata & Sons, or the master plan for Bhubaneswar, the new capital of Orissa. Koenigsberger was also a founding editor of MARG magazine. Before being called to Delhi to work with the central government, Koenigsberger had become a prominent figure in India’s evolving architectural landscape and had established a reputation as a town planner.

Throughout his time in India, he had also displayed enthusiasm and ambition for developing low-cost, prefabricated housing. Arguing that mass production was particularly suited to India because of the “simpler” housing needs of the Indian worker’s family, Koenigsberger designed the Tata House for Jamshedpur.

Built on a light steel framework, with walls of precast aerated concrete blocks and a barrel-vault roof of the same material, the component parts could be transported by lorry and assembled on site. In Mysore, too, Koenigsberger was involved in the development of a mass-manufacture housing scheme initiated by Bangalore industrialists and a British engineering firm to meet the severe housing lack in urban areas. Like many other prefab schemes that were initiated in the 1940s, however, these projects remained on the drawing board.

It is not surprising that when Koenigsberger was invited to advise the government of India on the chronic housing shortage, he recommended prefabricated housing as a viable solution. From October 1948, as Director of Housing, he began setting up the Hindustan Housing Factory in Delhi, which was to serve the capital city, supplementing rather than replacing the traditional construction of houses and targeting refugee housing needs.

It was a pilot project, initiated with the aim of replication across India’s urban centres. The simple single-storey housing units produced by the factory offered two rooms, rear and front verandahs, a kitchen and a separate bathroom and lavatory accessed via a small rear courtyard. While they could be added to incrementally or combined to make larger units, the real innovation of the houses was the use of large load-bearing aerated-concrete wall panels that were quickly cured by the relatively new process of autoclaving.

The aerated-concrete panels offered excellent thermal properties and could be produced using local materials. Doors and windows were to be fitted to the panels in the factory so that site work could be reduced to building simple masonry foundations and assembling the ready-made panels.

What could possibly go wrong? Well, pretty much everything, as it turned out.

To begin with, the delivery of prototypes of the houses, which were needed for testing in local conditions and finalising design details, was delayed. Meanwhile, the Ministry of Health took over six months to establish the factory’s management and administration structure, define its constitution, select its committee and hire skilled staff, which postponed the commencement of actual building work.

Apart from that, a dock fire in Liverpool, the sinking of a ship loaded with vital supplies in the Red Sea, the overcrowding of Bombay’s harbour in the summer of 1949 and shortages of special wagons for the transport of heavy machinery from Bombay and Calcutta to Delhi, all hampered progress. It was not until the summer of 1950 that the factory started producing houses, after a backlash in the press and Parliament had already begun.

To make matters worse, a worrying number of the aerated-concrete panels started breaking during autoclaving, while others developed cracks after erection. The houses were falling apart. Unable to solve the problem, production stopped in December 1950. The scandal that ensued ended Koenigsberger’s career in India. Politicians who had been against the scheme launched an aggressive attack in Parliament, which was intensified in the media and supported by groups that had hoped the project would fail, including the PWD and elements of the construction industry.

Headlines such as “The Full Dope on GOI’s Pre-Fab Racket,” and “Prefab Housing Project A Criminal Waste” coursed through the press. Health Minister Rajkumari Amrit Kaur dismissed Koenigsberger as manager of the housing factory in April 1951 and he subsequently retired from his government duties, returning to Europe bitterly disappointed.

Koenigsberger, a naturalised Indian citizen, settled in London, where most of his family was living. He continued his work on low-cost housing and urban development in rapidly growing cities but as director of the Department of Tropical Studies at the Architectural Association, Professor of Development Planning at University College London and in his advisory roles for the United Nations, World Bank and various nation states. His book Manual of Tropical Housing and Building, co-authored with TG Ingersoll, Alan Mayhew and SV Szokolay and published in 1974, became ubiquitous in architecture school libraries in South Asia and other “tropical” geographies. He died in London at the age of 90.

Ironically, production of the panels resumed shortly before Koenigsberger’s departure from India. The autoclaving had brought out peculiarities in the local cement that were “nursed” by adding more lime. The Hindustan Housing Factory still exists, albeit under another name: Hindustan Prefab. According to their website, their premises include a Technology Park, where parts of the failed refugee housing are displayed.

Apologies for the short notice – but if you’re in Accra this weekend and want an opportunity to improve your writing skills, there are some free places to join an excellent Architectural Writing Workshop. 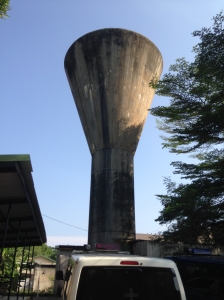