I’ve been interested in the work of Patrick Abercrombie for some time now. His 1943 London County Plan (developed with John Forshaw) was a war-time best seller and is filled with wonderful drawings and coloured plans that I enjoy looking at, and I frequently cycle past the white rendered late Georgian house in Oxton that he used to live in. This is a quick post to show some of the material I’ve uncovered to date.

In addition to developing several plans for UK cities, he also produced a plan for Dublin, but far less known is the work he did in Sri Lanka in the 1940s and 1950s. It is this work that I’m currently (and very slowly/intermittently) researching. He prepared a a regional plan for Colombo in 1948 working with a local architect Oliver Weerasinghe (Government Town Planner, b?-1980), as well as editing the town planning policy for the city. In their report they noted,

‘The re-planning and re-construction of the slum areas of Colombo and the obsolete parts of the built-up areas of the city to meet present day requirements is also a regional planning problem of first importance. The adoption of lower housing densities and greater recreational open space in these re-planning schemes will leave an “overflow” population which will have to go outside the existing built-up areas.’

To accommodate the ‘overflow’ population they proposed to build three towns at Ratmalana, Homagama and Ragama. Each town, located around 10 miles from the centre of Colombo and linked together via a ring-road was each to accommodate around 40,000 residents.

I’ve found the broad planning proposal they proposed for Colombo, along with some photographs of the three settlements prior to their development. 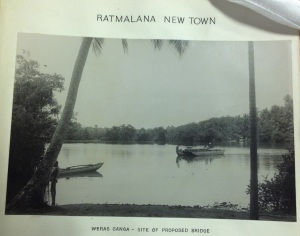 Weerasinghe and Abercrombie also worked on the Anuradhapura preservation scheme together, developing a plan in 1942 that was subsequently developed post-war with a view to preserving the ancient temples and monuments as well as developing new housing proposals for the town.

Weerasinghe was one of the first qualified engineers in Sri Lanka. He studied at Cambridge, and later as one of Abercrombie’s Civic Design students at Liverpool (which explains their subsequent collaboration). After practicing as Government Planner he served as Sri Lanka’s Ambassador to the United States in the 1960s before returning to his planning roots as an Inter-Regional Advisor in Urban Development of the United Nations (1971-1973), working in the Middle East, Africa and the Caribbean. From 1974 he continued as a UN development consultant.