Architecture: how public space in India was refined by Charles Correa and Nek Chand Saini

In a single week this June, the world of architecture lost two artists who celebrated modern India through buildings, landscape, sculpture and gardens. Charles Correa, India’s best known architect, died on June 16 in Mumbai. Nek Chand Saini, the creator of the Rock Garden in Chandigarh, died on June 12. A self-taught artist, he created art work out of junk.

My research in India has taken me to some truly wonderful sites, not least the 16th-century city of Fatehpur Sikri, near Agra, commissioned by Mughal emperor Akbar. Well-designed spaces bring pleasure and even improve health and well-being, rather like a good piece of music.

Like those at Fatehpur Sikri, Correa and Nek Chand simply made structures and spaces that feel “better” than others. Despite hailing from opposite ends of the social spectrum, both reached shared conclusions about what makes a space work. But more than this, through their lives and work, they tell us something of the story of India.

Born in 1930 in the colonial town of Secunderabad, Correa studied architecture at MIT in the US before returning to India in 1954. He immediately set out to develop an architecture that responded to climate, rejecting the US euphoria for air-conditioning. Instead, he sought solutions that would exploit cool breeze and shade.

Correa was also pursuing an architecture that would respond to India’s recent independence. He sought to introduce notions of “Indian-ness” into his proposals. His architecture is not overly concerned with elaborate forms, rather it seeks to create a series of flowing spaces often centred around an “open-to-sky” element. The visitor moves through the buildings blurring divisions between inside and outside, taking in carefully incorporated views.

Art out of waste

Nek Chand took a less conventional approach. Often referred to as an outsider artist, he received no formal training. Born in 1926 in what is now Pakistan, the son of a farmer, he was forced to flee his home in 1947 as a result of India’s Partition.

In 1951, Nek Chand obtained work at the construction site that was Chandigarh – a new city to replace the loss of Lahore – designed by the modernist architect Le Corbusier. He worked as a road inspector by day. By night, he created a secret sculpture park full of figures made from found objects, broken ceramics and the remnants of the villages demolished to make way for Chandigarh.

Space that evokes and engages

Both Correa and Nek Chand were concerned with the notion of promenade, where the visitor is taken on a journey through a series of enclosed spaces, proceeding spaces hidden from view and revealed suddenly to dramatic effect. Both exploit a site’s natural attributes, responding to contours and always incorporating sculpture and artwork.

Both make a subtle reference to the past, often suggestive of village life, not in a sentimental manner but rather as an integral part of the design. Use of devices such as a space to talk and meet with friends, or a spot to sit quietly with strangers to share a view, have a profound effect. The powerful experience of simply walking through a courtyard clad in a careful selection of materials whilst admiring nature, landscape and artwork, cannot be understated.

Both Correa and Nek Chand were deeply affected by India’s Independence and sought to contemplate this event through their work. For Correa, it was a time to rebuild and rethink the nation, to debate what it meant to be both modern and Indian. At the same time, his use of Mughal-inspired red sandstone demonstrates the idea that India’s pre-colonial past was to be celebrated.

As a migrant to the symbol of India’s political ambition, Nek Chand was also well aware of the changes afoot. In his work there is a sense of loss, a longing to remember the past, as well as a childlike desire to recreate mythological scenes from folk tales and epics.

After their deaths, the works of Charles Correa and Nek Chand will remain wonderful tributes to their passion to improve built urban space in modern India. There can’t be many better legacies than the simple fact that we can learn much about space, light, form and beauty from the spatial experience of joy which their creations have given us.

This article was originally published on The Conversation.
Read the original article.

This looks like it will be a very informative and productive conference. I look forward to seeing many of you there.

Envisioning the Indian City (ETIC) is a UGC-UKIERI Thematic Partnership Project (2013-15) between the University of Liverpool, UK and Jadavpur University, India. The Project (seehttp://eticproject.wordpress.com/ ) studies Indian cities as crucibles of cross-cultural encounter, with special focus on Goa, Pondicherry, Kolkata, and Chandigarh. Over the past two years, with numerous seminars, research projects, lectures and presentations, and two International Workshops held in Kolkata and Liverpool, the Project has brought together a variety of interdisciplinary approaches to urban studies, cultural history, on-site research, archives, city planning, architecture, the city in art and representation, collective memory and communities in the city.

In the third of our International Workshops, to be held at Jadavpur University on 17-18 August 2015, we welcome presentations on urban encounters and exchanges through individual  and… 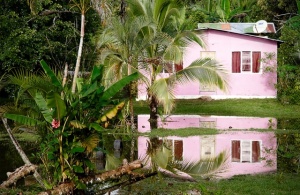 The research project takes form of a two week workshop which is open to students as well as the general public. Our agenda is nomadic but we aim to study the tropical dwelling through architectural stories about home, culture and place.

Initially we are planning a 3 year agenda with a specific focus on one country per year, starting with Costa Rica, Vietnam and India.

During the two week field trips, we will visit the homes of people from all walks of life, talking to them about their experiences in the architecture they inhabit, and exploring that same architecture as a character.

At each home we will make a short film as a narrative composition of images (form, space, light, colour, materiality) and sound (voice, story, city, nature). The films will become a unique and perceptive form of architectural construct.