The Follies of Empire world make a good book title and topic for future study. Buildings, or rather monuments have frequently been deployed as tangible metaphors of political ideology. Throughout the territories of the British Empire we encounter structures that were certainly folly, sometimes extending to the scale of an entire city, as New Delhi designed by Edwin Lutyens and Herbert Baker from 1911 demonstrates. The Victoria Memorial in Calcutta designed by William Emerson from 1906 would also qualify; a palatial white marble pile built in a classical style and decorated with a blend of ornamentation dedicated to the late Queen. Calcutta grew into a major trading port and capital of British India after the East India Company set up a trading post off the Hooghly River in 1690. Throughout the 18th Century the port grew into ‘the second city of Empire’, suitably grandeur and packed with suave mansions and gardens that lined the river. Traders and merchants made vast fortunes and were able to fund lavish lifestyles in Palladian inspired mansions in the exclusive Garden Reach and Alipore districts of the city. Although trade bloomed, fortunes were made and honours bestowed, the city was renowned for its malaise and disease, and many afflicted British visitors spent the last days of their brief lives in India.

A Scottish cemetery was created, as well as one for the English, which is the focus of this article. The cemetery opened in 1767, ten years after the Battle of Plassey, which cemented British control over Bengal. The dead were taken via raised causeway to what were then, the outskirts of the city, away from the River and into marshy land. Illuminated by torchlight, the ceremonies took place after dark and the coffin was carried out to the cemetery, sometimes accompanied by canon fire.

A brief time on earth did not limit the size of one’s mausoleum nor the tributes bestowed, and the demand for plots in the cemetery resulted in rather cramped conditions with ever-extravagant tombs, temples, obelisks, pyramids and rotundas competing for attention and space. 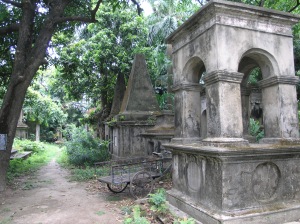 Today, the cemetery is surrounded by the mega-metropolis of Kolkata, its walls clad with advertisements and hoardings, an encroachment that reveals the prime real-estate value of fashionable Park Street.

The entrance is a portal into another world, an overgrown necropolis of dilapidated and listing tombs held together in some cases by creepers and vines. The sunlight is diffused through the trees and their shade and cooling effect creates a calm and suitably peaceful setting for exploration, aided by a grave register and plan obtained at the entrance for 100 Rupees. The pleasure of reading about the cemetery’s occupants, the sometimes delightful (occasionally hyperbolic) descriptions of their personalities and feats is only matched by the staggering collection of mausoleums to discover. Elizabeth Jane Barwell is noted as being the ‘The Celebrated Miss Sanderson’, prior to her marrying a ‘Richard Barwell Esq.’ who died ‘aged about 23 years’ and was noted as being ‘The Friend of Warren Hastings’. Colonel Charles Russell Deare’s demise was to be ‘slain by cannon-ball at the storming of Tippoo Sultans Stronghold at Santinungulam’. Others are less dramatic but reveal something of the everyday activities, such as Gregory Jackson’s inscription from 1815,  ‘Many years Company agent for loading and unloading the Honorable Companys Ships at Kedgeree’.  Colesworthy Grant, died in 1880, is remembered for being the founder of the Calcutta Society for the Prevention of Cruelty to Animals. In some cases we no longer know who is interned in these exaggerated structures; a sad and slightly ironic situation­ as these monuments were intended to immortalise and suspend the transient. 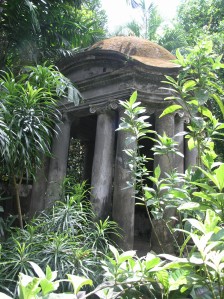 Two tombs stand out, both in terms of design and their occupants. The extremely large elongated white pyramid-cum-obelisk in the centre of the cemetery houses Sir William ‘Orientalist’ Jones, the founder of the Asiatic Society, Sanskrit scholar and judge. A far humbler tomb, but perhaps more interesting is that for eccentric Irishman, Major-General Charles Stuart. Known as ‘Hindoo Stuart’, because he adopted the local way of life, including bathing in the Ganges, wearing of Indian clothes and adopting the Hindu faith (yet is curiously buried in a Christian cemetery). He also wrote a tract encouraging European women to adopt the sari whilst in India. His tomb resembles a small Hindu temple, and contains some of the sculptures and idols he collected. It is a delightful and playful addition. The remaining sculptures from Stuart’s collection are now housed in the British Museum as part of the Bridge .

The cemetery was at one point completely neglected and overgrown with vegetation, wildlife and some of the tombs were even being used as shelters for the living. Thankfully the British Association for Cemeteries in South Asia and the Calcutta Historical Society are now actively involved in repairing and maintaining the cemetery. The main paths through the graveyard are clear, but the burial plots have a forgotten jungle settlement feel. Most of the tombs are constructed in brick and then rendered, which is no match for the monsoons and extreme temperature changes. The Bengal delta is alluvial mud and stoneless, so any stone used had to be expensively shipped from Madras, and marble was ransacked and recycled from the ancient ruined capital of Gaur. Some of the tombs have now collapsed and others are charming, but vulnerable, ruins. A programme of restoration is underway and recent renovations are showing real promise, although Jones’s sepultura has been rather enthusiastically restored, painted in a glaring white, complete with a red rubber floor finish around its perimeter.

In addition to the inscriptions and architecture, many of the tombs have carved decoration including the skull-and-crossbones, anchors, winged hourglass, and upturned torches, as well as the usual urns. 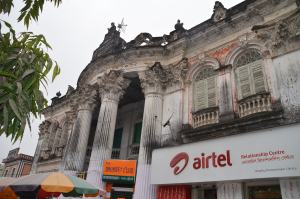 The British presence in India is well known; less so is that of the French. Pondicherry was their major trading settlement in the south of India, but 20 miles north of Kolkata is another French outpost called Chandernagore. Although most of India was under British control various trading post concessions were granted to other nations. Chandernagore is a small town located on the banks of the river and contains an eleaborate landing stage as well as some exquisite baroque mansions.

It too has a cemetery. Although not as grandiose as Park Street and in a worse state of repair, it contains some notable mausolea, and a rather good temple (almost Doric but not quite), that is built in ashlar and has weathered more gracefully than its neighbours. The cemetery has recently been extensively catalogued but there seems to be little funding available for preservation and restoration.