Three Buildings by the Architects’ Co-Partnership

Iain’s last post mentioned Leo De Syllas, one of the founders of the Architects’ Co-Operative Partnership (ACP) created in London in 1939. The practice originally consisted of 11 members recently graduated from the Architectural Association who wished to work without office hierarchies and on projects of a predominantly social character. They were strongly influenced in their methods by Berthold Lubetkin’s Tecton. The original members other then De Syllas were: Kenneth Capon, Peter Cocke, Michael Cooke-Yarborough, Anthony Cox, Michael Grice, A. W. Nicol, Anthony Pott, Michael Powers, Greville Rhodes and John Wheeler.

De Syllas was the African mastermind of the firm that set up a studio in Lagos in the early 50’s. Their contribution to Tropical Architecture has never been fully studied and is greatly underestimated. De Syllas was one of the most important figures of the second generation of tropical modernists alongside other designers such as James Cubbitt, John Godwin and Gillian Hopwood. Works from Architects Co-Partnership are largely displayed in Fry and Drew’s masterpiece, Tropical Architecture in the Dry and Humid Tropics in 1964. This shows how Tropical Architecture was intended as an innovative design system used by a small group of designers willing to disseminate their design ideas, in an article on Architectural Design in 1959 De Syllas stated: the work shown on the following pages is a record of the adaptation of the principle of tropical architecture to various requirements and some of the lessons learned in the process may be universally useful. 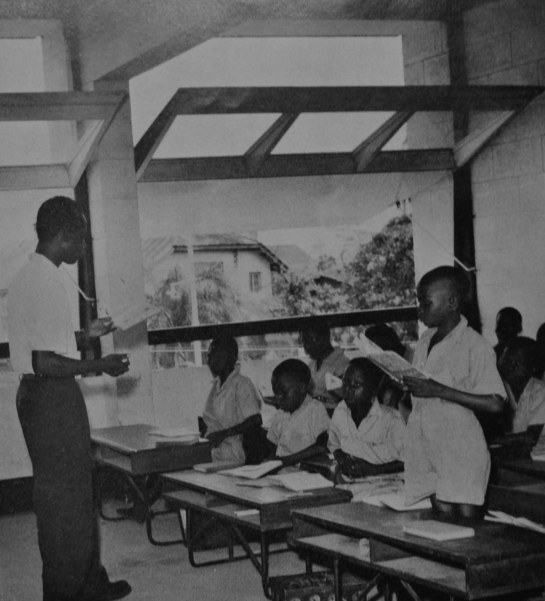 I would like to present three buildings by the Architects Co-Partnership that show their highly experimental attitude. I believe that the appliance of scientific principles and climatic design tools such as solar diagrams and wind charts is highly sophisticated and a perfect example of the tropical design approach. The first building (above) is the Ansar-Ud-Deen School in Lagos, it is a simple design with a concrete structure common to many of the school buildings built in those years. The interesting part of the design is the usage of a single device, simple but yet highly effective. It consist of an horizontally pivoted timber framed shutter that can change position in the different time of the day and become a shading device while assuring cross-ventilation.

The second building is a private house in Kano, in northern Nigeria. I see this building as the direct architectural result of the appliance a periodic heat flow diagram. The materials used, the type of openings and the general concept are all chosen in order to control the diurnal variation of temperature inside the building. The first floor, where the daily life takes place, has 60cm thick stone walls and small openings while the first floor with the bedrooms is a light timber structure with floor-to-ceiling openings. This structure, alongside the use of the double height internal patio, allows to reduce the time lag period in the diagram assuring a longer comfort period. In this case we can assume the whole building as a single climatic device acting towards a specific purpose. 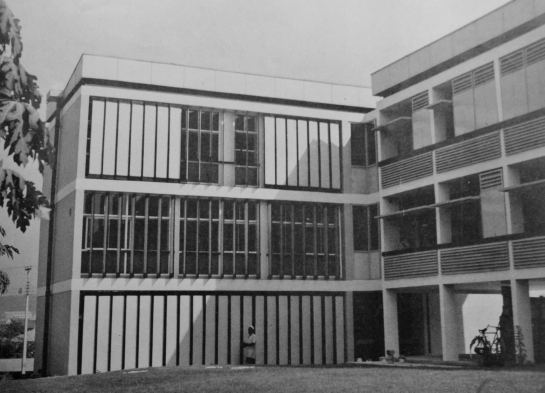 The last building is the Department of Marketing Exports in Ibadan, a t-shaped building with facades facing all four of the cardinal points. A different device was used in each facade: in the east and west facades we find vertical pivoted shades, in the south facade fixed overhead shades and a system of openings assuring cross-ventilation and in the north pivoting storm shutters. The facades reach highly sophisticated solution dealing at the same time with sun-protection, air flow and protection from occasional rainstorms. In the north and south facade in particular we can see the usage of mixed devices: shutters, shades, venetian blinds both movable or steady. The highly experimental will of this building is demonstrated by the fact that it was first built on two floors and then after experiments were made on the function of the different devices increased to three floors.

I’m currently conducting a deeper investigation and a re-drawing of many other Architect Co-Partnership buildings and I would love to be able to get in contact with someone who works or worked in the firm. Have you worked in the office? Have you got any information on this African designs? I’d love to hear from you, feel free to contact me!