Here’s another excerpt from an interview with Jean-Philippe Vassal, carried out in 2006 as part of a research project funded by the Franco-British Union of Architects. Vassal talks more about the references to ‘far-away’ places within their architecture and the influence of Africa… 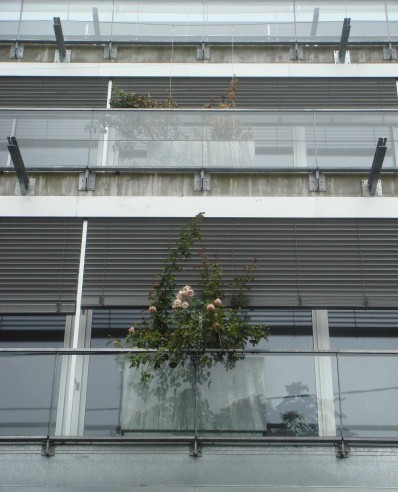 Management Sciences University Building, Bordeaux. Lacaton & Vassal, completed 2006.             Roses climb up and across a grid of wires to create a facade of flowers.

JH            Because the Union encourages relations between the French and British in terms of architecture it is perhaps pertinent to ask whether you consider your work to be typically French in any way?

JPV         Perhaps there is a part, yes, but I don’t know… What I do know is that I have travelled quite a lot, I have lived in Africa and I am very curious of different things. I like changing my situation, to see new things and sometimes I am frightened by the fact that architecture could fix you somewhere. Each time I have the possibility of creating a new project somewhere else or the possibility in my work to take something from a different place – like flowers, like Turkish tiles [at the Architekturzentrum cafe in Vienna] – to make this connection with another country, to escape. Very often, with flowers.

JH           Like your University building in Grenoble, for example?

JPV         Yes, where we use tropical flowers. We have also just finished a big building in Bordeaux with roses as a background. We have 700 climbing rose trees with beautiful flowers and yes, to find something that creates distance from the architecture, from materiality.

JH           Do you think this comes from [your] living in Morocco? I’ve read that Casablanca is a city where French [culture] and the West meets with Islamic culture…

JPV         Yes, this confrontation occurs. In Casablanca you have a lot of incredible, modern architecture of the 1950s, the ’70s – really beautiful buildings and at the same time you have the medina, you have this mix. It is very interesting and there is a sort of… old and new things touch, there are different styles very close to each other.

In the 2G book [Lacaton and Vassal by Ilka and Andreas Ruby] there is an image of a nomadic school in the Sahara. There is nothing around the school, it is just a hut and we don’t know where the parents of the children are, but we imagine the children travelling long distances to arrive at the school. It is, I don’t know, a structure of 80 metres square, about 1.5 or 1.6 metres high – not very tall – and made of branches in the sand. So when it is really hot and bright outside, inside the hut it is dark and cool. The plants allow strips of light in and you enter this place to go to school. There are twenty school children, 6 or 7 years old, sitting in the sand all looking in one direction at a TV screen with a programme on – no teacher, you don’t need a teacher, just a TV. There are batteries and the TV which are linked to a solar panel on the roof and it is in the middle of the desert! And for me, it’s really the embodiment of modernity: architecture and modernity are precisely this. This mix of situation, place and these elements create – very efficiently, but also with a lot of poetry – this story.

JPV         Yes, it exists. Maybe for three years and then the wind blows it down and they just build another… And the children, you can go in and they don’t care, they just focus on the TV screen and the programme they are watching.

JPV       Yes. For me, this is precisely architecture because here in Europe you could not imagine this happening. I like to imagine this cross fertilisation of things. Here you say no, I cannot employ straw as a roofing material, I cannot have a TV if there is no window… You can adapt very traditional things with more modern things; it is very easy.