Designing Buildings in 15 Minutes: A day in the life of Otto Koenigsberger, Government Architect to the Govt. of H.H. the Maharaja of Mysore

The following extract is from a private letter written by the architect, planner and educator Otto Koenigsberger (1908-1999) to his family in 1940.  He probably typed it in his small room in the bungalow he shared with the Brinitzer family at 42 Infantry Road, Bangalore, India. Like the Brinitzers, Koenigsberger, a native Berliner with a Jewish background, was in exile. 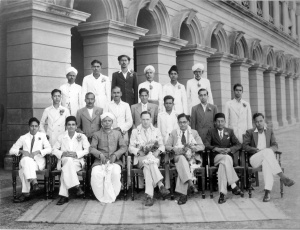 Due to a fortuitous family connection, in 1939 Koenigsberger had been contracted to work as an architect in Princely Mysore, a South Indian state with a limited amount of independence from British colonial rule. Thus his boss was not a member of the British Raj, but the ambitious Dewan (Prime Minister) Mirza Ismail, whose favourite pastime was building. In November 1939 Koenigsberger was promoted to Government Architect, the highest position for an architect in the state. As the humorous extract reveals, although his job kept him very busy, it did not prevent Koenigsberger from trying to build up a private practice or enjoying himself in his new home . . .

“I shall give you a short review of one day in the life of the Government Architect to the Govt. of H.H. the Maharaja of Mysore.

My boy appears at 6:30 am in my room in order to wake me up. This has the result that I go on sleeping till quarter to or quarter past seven. Which of the two depends on the situation whether I must go and see the Dewan in his Bungalow or not. He belongs to those immorally hard working people whom I thoroughly dislike and has already one hour of hard work finished when I come to see him at 7:30. The next item is an enormous breakfast at 8 and instruction of my private draughtsman at 8:30 – Yes I have a private draughtsman and ‘secretary’. He is an Angloindian with the nice name Eric J. Crane, is rather shy, not too bright, and of course very unreliable. He comes for three hours in the morning and three in the afternoon and tries hard to learn how to do architectural drawings, so that I may be well armed and prepared when the great wave of private work comes of which I am daydreaming.

If there are no other inspections (on most days there are, my average is about 30 miles a day inside Bangalore only) I go to the office between 9 and 10 in order to have some quiet hours before my six men arrive at 11.

The morning post brings about 5 to 6 requests for designs per day, say one hospital, one bungalow for an officer, one railway station, one cinema, and a number of smaller tasks and alterations. In addition comes a tray full of files, for all building plans, small or big must go through my hands before they can be sanctioned by Govt. In Europe I would have worked about a week to design a hospital and about another week or fortnight to prepare the drawings. Here the main idea and the sketch must be ready in ten to fifteen minutes and then the assistant or draftsman must prepare the plans within two to four days. Of-course these designs cannot be so well worked out as mine were at home. To keep up at least a certain standard of exactness and efficiency I must permanently go round from one to the other to correct the plans and to tell them what they must do. In the intervals between my wanderings from one drawing board to another I try to attend to my files, to answer letters, and to make a number of sketches and small plans which I can finish myself in less time than it would need to explain to somebody else how to do them.

At 1:15pm I go home for lunch and for new instructions for my home-draftsman and back to the office at 2 or 2:15. The afternoon is usually filled with visitors who want all sorts of technical instructions or come discussing of new building schemes. Of-course only a very small percentage of our many designs will be built, and if they are it will take at least half a year or a year till they are started. That gives the Dewan who plays the role of ‘Bauherr’ [client] in this game ample time to ask for new schemes and accordingly revised designs.

Usually I am home at 6 in the afternoon. I sit down for a late but very big tea which usually takes about half an hour, not because I eat so much, but because I am just lazy and enjoy my rest. Every second day a Kanareese lesson follows from 6:45 to 8 or 8:15. If there is no lesson this time should be spent with learning what we had the day before, but so far I have always found an excuse not to learn so that the result of a fortnight of lessons with a very good teacher is very poor. 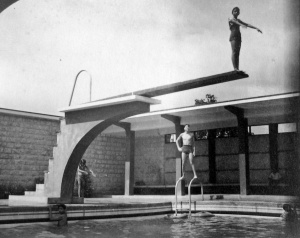 Dinner is celebrated from 8:30 to 9:30 when we hear the news from England. As it usually is a very good and rich dinner you can imagine that there is not much energy left for letterwriting in the evening.

This description of my life is unadequate in two points: (1) it sounds boasting and at the same time complaining. But it is certainly not meant to do so. I thoroughly enjoy my work. I only tried to explain that a day of permanent designing is somewhat exhausting. (2) It gives the picture of rather a dull and narrow (English for ‘spiessig’) life. But actually I am meeting interesting new people nearly every day, studying a most interesting country, reading a few good books (for instance the latest Aldous Huxley ‘After many a Summer,’ which I enjoyed very much), seeing a film once in a while and hearing a good deal of Indian and European (gramophone) music.”[1]

Note: Although Koenigsberger’s native language was German, the outbreak of World War II forced him to communicate with his family, who were by then living in the USA and UK, in English – letters in German were censored or confiscated.

The images are reproduced with the permission of the Koenigsberger family.