Nairobi definitely has its charm. Unlike West Africa’s capital cities with their myriad of pot-holed or dirt tracks for roads, Nairobi’s roads at first glance seem akin to being in South or North Africa if not the West. The motorways seem to thrust the driver into the superhighways and traffic freedom that most of Africa can only dream of. Even the traffic lights work – in a peculiar manner we found out. 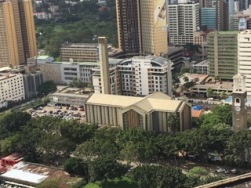 A trip from the airport to the city centre however can take 2 hours at peak traffic congestion periods or if it rains, so the absence of potholes does not equal speed of arrival. As one nears the city various parts of the skyline become more visible. An abstraction of the empire state building, followed by a squat version of Big Ben, signifying the parliament buildings, then the thrust of downtown Nairobi. The informal city seems well removed from view as the planned city is viewed before one’s eyes. Conference over, on day three a motley group of presentation weary conference attenders take a walk through central Nairobi – this is what we saw.

Starting out a vantage point on Kimathi Street we walked past the ‘hip’ Java Café to a bookshop in search of Iwateni and Wanjiku’s A Brief Tour of the Buildings of Nairobi, five-star recommendation if you can find it. I wanted to find Dorothy Hughes’ cathedral, which seemed absent from our Guidebook, we finally found a very short paragraph about it – clearly not significant to our guidebook writers. We nearly walked past its unimposing exterior façade.

Security in Nairobi has heightened since Westgate, so getting in to the building required bag searches and photography was not allowed. A discussion with the priest in charge gave us the permission we craved. Hughes’ oeuvre is definitely worth viewing. The play of light and the scale of the glazing enraptured us for the better part of half an hour. Its expressed structure also mimics well the stonework of the traditional European church in cast concrete ribs with occasional delicate details. Presumably planned to respond to the post Vatican Council 2 church layout, it has the alter moved from the apse to engage more with the congregation. This works well in relation to the cruciform structure of the layout.

Enroute we came across the memorial to Lionel Douglas Galton-Fenzi who was involved in an early car rally, which established road routes from Nairobi to various parts of East Africa and founded the East African Automobile Association. The monument also marks the historic central milestone for Nairobi Kenya, and gives distances to various faraway destinations. Not in terribly good shape but gives a sense of Nairobi in relation to the rest of the African continent.

Next stop KICC Centre. More security checks to get in to what, at first glance seemed, an inauspicious entrance to a rather large structure. As we make our way to the entrance however the structure begins to emerge. A very Scandinavian group of offices in a watered green setting soften’s the structure a brutalist concrete façade from ground level upwards to the scaling of a group of Swedish chalets. The entrance podium level is dark wood and retains its seventies interior design. The trace of a once clock strikes the right spot for the pre tower climb. The lift to the 27th floor works, and we get out before realising there is still some climbing to do. The top of the tower gives an amazing vantage point. A few other intrepid visitors share our view, Nairobi revealed, is a very green city but noisy too we can hear the soundspots and see the transport chaos from afar. Fast trip down and a coffee stop with a great view of the building – we didn’t make it into the conference centre but viewing the interior setting compensated for this. The detailing cries back to the Barbican Centre in London, apparently Norsvikk worked with the architects dept of Kenya city council – might there have been an exchange of ideas? 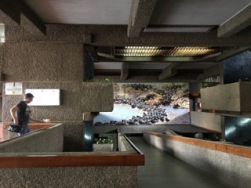 Could we take in a few more buildings before dusk? The central mosque, next and across the road from Hughes and Polkingham’s Pensions building. A wall of high-rise architecture with a podium shopping façade. We split ways at the mosque as I wasn’t allowed to visit the male areas. The mosque occupies a large expanse of land in the CBD. Its been constructed around a much older mosque and now has a number of ancillary facilties. Part of its original site is occupied by a bank building which we found out later was one of Kenya’s first local savings banks. 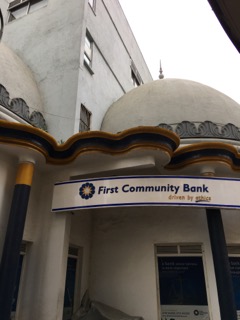 We trudged out of the CBD on surely one of the best-designed footbridges in Nairobi to the campus site of the University of Nairobi, separated from the CBD by a busy motorway. An oasis of calm set around a quad, this did seem like the quintessential tropical university college campus. A few somewhat newer large additions including a school of Architecture and planning did not detract from the original quad buildings. To one side was the Nairobi Synagogue another visit for another day. Finally we made our way to Kenya’s National Theatre situated opposite its five-star Fairmont Hotel, used for the filming of “Out of Africa”, once owned by Tiny Rowland, and survivor of a 2010 terrorist bomb attack. We walked in on a major event for Kenya’s elite and had our beers and dinner whilst we ‘people-watched’ and were offered canapés on the balcony.

If you have the morning to spare, (we did it the next morning), a visit to the National Museum at the aptly named museum hill would be a great way to end the tour. Be careful of traffic lights where the ‘green person’ does not necessarily grant you right of way. When you do get through the doors bite your lips and pay the hefty foreigners fee, it will be worth it. It’s a series of buildings knitted to gether with good architectural nouse. The original building is a colonial affair, added to this is the Aga Khan wing, and its most recent addition formalises the setting into a court yard with the obligatory entrance, museum shop and café all being part of the project. At a location somewhat further downhill on the site is a snake sanctuary, which we decided to give a miss to. We were treated to an installation display showing the Scandinavian contribution to architecture and development in East Africa with Norvikk starring with the KICC tower and others who had contributed less show piece buildings but more development focused infrastructure to East Africa in the 1960s and 70s. Various parts of Kenya’s history from early skulls of pre neandrathel man, to the legacy of the Leakey family and banking, which brings the viewer back to the 20th century with the m-pesa exhibit. The museum café should round up your 24 hours in Nairobi city perfectly with locally brewed Kenyan coffee on tap.