Heading west from Takoradi along the coast-road towards Côte d’Ivoire there are a number of fishing towns and natural harbours, such as Axim and Dixcote. 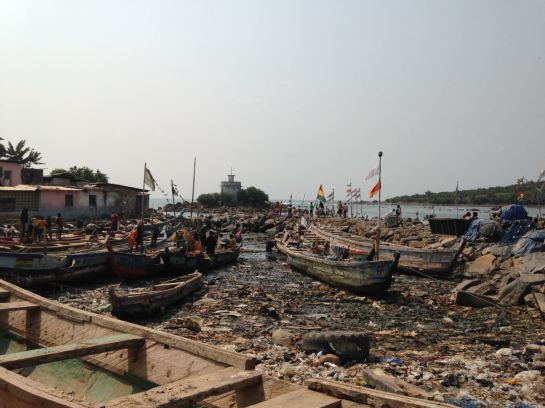 Axim was a major port during the early 20thC, exporting £250,000 worth of goods in 1913, and the mail boat from Liverpool (as well as ships from the US, Germany and Belgium) called every 10-15 days before heading on to Sekondi. Before the British occupied the Fort at Axim (Fort St. Anthony) it was held built by the Portuguese in 1515 and then captured by the Dutch from 1642. The Fort was conceded to Britain, along with the other Dutch forts east of Elmina on the 6th April 1872.

A European hospital was established in the town in 1901, and the British Bank of West Africa opened a branch, having traded in Accra from 1897. There are still some colonial buildings to be found, and a photograph of the District Commissioner’s bungalow (c.1914) is held in the UK National Archives.

Besides the Fort, the Quandahor Building dominates the town from its elevated position. The building (according to some sources) was built in the 1920s, but with what purpose and by whom?

Nearby Dixcove also has its fort (macabrely named Fort Metal Cross after the slave branding iron used there) and the town still retains its thriving fishing industry. The fortress was constructed from 1683 by the Royal African Company and continues to resemble the 1806 print below. Needless to say, it is a harrowing structure, and a surviving relic of what must be one of the lowest points of British history.  By 1868 the Fort was under Dutch control, before being returned to the British just four years later. It was made a World Heritage Site in 1979 and has recently been inhabited by an Englishman intent on refurbishing the place.

It was only in 1911 that a Customs Warehouse was completed and a market shed was erected in the Dixcove – is the image below the customs warehouse? A few other Colonial period buildings survive and we will endeavour to find out more about this fascinating place.

The Customs Warehouse in Dixcove?