Alfred Roth’s criticism and answer to early schools in Kuwait

Recently, my research interests have taken me to Switzerland to the ETH Zurich archives with a focus on Alfred Roth, particularly looking at his work in the Persian Gulf throughout the 1960s and 1970s within the context of early critical regionalism. Roth had once worked in the offices of Le Corbusier, whose influence in form and colour was undeniable through several of his school designs executed in Kuwait in the 1960s and 70s. However, it is his criticism of Khaldiya Girls’ Secondary School designed by Rambald von Steinbüchel-Rheinwall (figure 1) that is particularly scathing and his architectural response is to be the topic of this post.

Figure 1Rambald von Steinbrüchel-Rheinwall’s secondary school for girls. This shows the assembly hall that Roth is so scathing about. (ETH Zurich: Alfred Roth Archive no. 131-0764-F-2)

In the excellent compilation of Modern projects in Kuwait from 1949-1989, Roberto Fabbri points out Roth’s scornful thoughts of this school, but only briefly mentions that this is for climatic reasons stating Roth’s thoughts on its environmental inefficiency.[1] In the recently published second volume, he unpacks this further by spelling out the other criticisms Roth had of the school.[2] Roth’s initial criticism is a four-fold affair relating to the excessive use of land, a waste of inner-space causing ‘uneconomic planning’, the neglect of climatic conditions through the widespread layout and ‘enormous glass area’ of the majority of rooms and finally calls the architectural design ‘superficial’ and one of ‘fancifulness.’[3] When Roth talks of ‘gaudiness’, he is referencing the swimming pool buildings and assembly hall, both included in Nelson Garrido’s images printed in Fabbri et al’s Modern Architecture Kuwait’s first volume.[4] Roth’s criticisms are placed in a document that examines the situation of Kuwait’s schools in 1964, within which Roth suggests several alterations to their improvements.[5]

In answer to his criticism of von Steinbüchel-Rheinwall’s school, Roth designed schools that drew from Kuwait and the Gulf’s rich Arab architectural and urban forms. Using his prototypes, he oversaw the construction of many prefabricated schools for a wide range of student ages. Roth aimed to take into account the cultural heritage of Kuwait with his designs noting his quote from Saba George Shiber’s 1964 study The Kuwait Urbanisation:

Figure 2 This image shows one of the successfully built schools by Roth with the glazing out of the sunlight owing to the covered walkway on the classroom’s exterior (1970-1) (ETH Zurich: Alfred Roth Archive no. 37-0762-F.Roth-11)

Roth’s architecture in Kuwait, as shown in the images (figures 2, 3 and 4), was contextual to its urban surroundings and respected the organic growth of design within Kuwait and the wider region. His prefabricated low-rise buildings, often introverted facing a courtyard and were built on a significantly smaller scale to the von Steinbüchel-Rheinwall designed school. The designs for all Roth’s schools had covered walkways blocking sunlight from internally glazed areas. The external walls exhibited as little glass as possible (figures 2, 3 and 4) featuring outlets for ventilation punctuating the exterior elevations ensuring climatic credentials (figure 4). The introverted nature was common across Kuwait and the Gulf primarily for cultural and climatic reasons and had been common in the centuries prior to the nation’s modernisation process (figure 3). While they do not look as extravagant as von Steinbüchel-Rheinwall’s school, Roth’s schools functioned successfully. 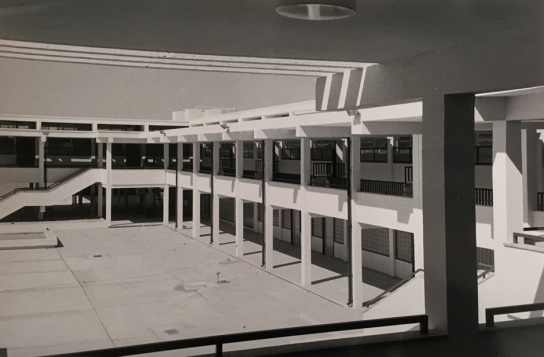 Figure 3 The internal courtyard of the school, showing the walkways on the exterior of the classrooms and how shaded they are from direct sunlight (1970-1) (ETH Zurich: Alfred Roth Archive no. 131-0762-F-Roth-22)

Through Roth’s criticisms of the fanciful designs that preceded him in Kuwait, he created a new form of Modern architecture influenced by research and the oversights of other architects. In terms of development and architecture in Kuwait, this was arguably a turning point towards a more contextual approach to architecture from Western designers. Buildings constructed in the decades after such as Jørn Utzon’s Kuwait National Assembly, Arne Jacobsen’s Central Bank and the unbuilt Mat Building proposals by the Smithsons built for the cultural and climatic conditions of an arid climate and conservative nation trying to find its true built identity. Archival material shows this dialogue between architects and different practices, manifesting itself in better more informed architecture that is not superficial nor fanciful.

Figure 4 The external wall of the school without glazing areas allowing for cross-ventilation and no direct sunlight into the rooms (1970-1) (ETH Zurich: Alfred Roth Archive no. 137-0162-F-Roth-4)