William Antony Henderson (1914-1998): Projects in the Middle East with Farmer and Dark

Henderson studied at Liverpool School of Architecture commencing his studies during Prof. Charles Reilly’s final year as Head of School in 1932. He described it as, ‘exciting times for me both in student work and in vacations when, twice with my friend Roger Ward, I travelled by cargo boat on cheap mail fare in Italy, Germany and Scandinavia and worked in the USA [for William Lescaze] and Canada in 1936’. Reilly would often arrange work experience for his students in New York during the summer before their final year and Henderson recorded the sojourn in his sketchbooks. 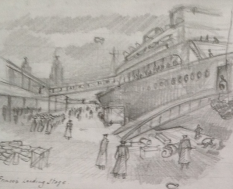 He returned to Liverpool and completed his thesis entitled, ‘A Residential group for the University of London’ before being awarded both the prestigious John Rankin Prize and Honan travelling scholarship that funded a research trip to Chile, the findings of which were later published in the Architectural Review. Although professing ‘little experience of nitty gritty’ he worked for Grey Wornum and was about to start work for Shepherd & Partners when war was declared on 1st September 1939. After signing-up to serve, he was posted to Turkey on a troop ship via Sierra Leone, round the Cape through the Suez Canal to Ismailia, with the final stretch by air. He served in the Royal Engineers designing roads and airfields (the illustrated diaries from this period are now housed in the Imperial War Museum).

Returning to the UK in 1945 he worked at Hertfordshire County Architects on their radical school building programmes. He joined the firm of Farmer and Dark in 1951, becoming partner in 1954 until his retirement in 1980. The practice was renowned for handling large complex projects and as their 1955 practice brochure notes, ‘there can be no casual atelier character for a team over a hundred strong’. Many large-scale projects were overseen by Henderson during this period, including the Automobile Association HQ and he was Consultant Architect to Kent University (taking over from Lord Holford), where amongst others he designed the Senate House, Keynes College, the Gulbenkian Theatre, as well as shaping the Master Plan – but what interests us here is the work at Kuwait, Aden and Lebanon. 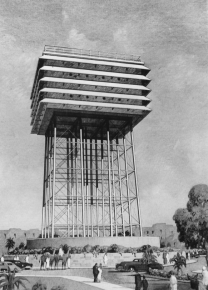 Henderson set up the Farmer and Dark Middle Eastern Office in Beirut to handle the large number of projects being commissioned in the region, including in Turkey and Cyprus. He first visited Kuwait in 1952, following the commission to design a power station and water distillation plant at Kuwait Town. Prior to the water plant, all fresh water had to be imported from Iraq. Building materials, including bricks, were imported from the UK, but post-war building rations resulted in the steel being sourced from Belgium. The large mass of the power station is dispersed through projecting triangular cornices and sloped vertical fins, that add shadow, texture and rhythm to the substantial volumes.

The Kuwait water towers, as drawn here by Cyril Farey, show a similar concern for using climatic modification to inform the character and formal composition. There is a restrained pragmatic approach to their work, as well as a concern for bold outlines and a clarity in the formal layout and planning. Further work was won including two primary schools, and an Engish Public School in Lebanon (subsequently abandoned following the 1958 Lebanon Crisis). 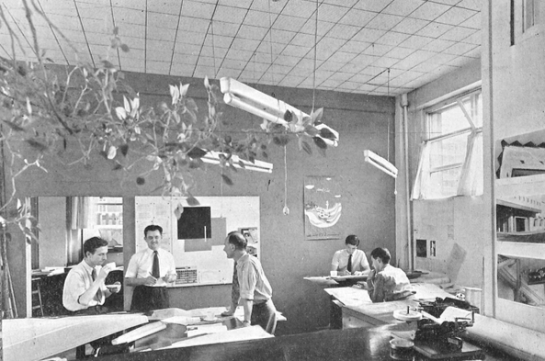 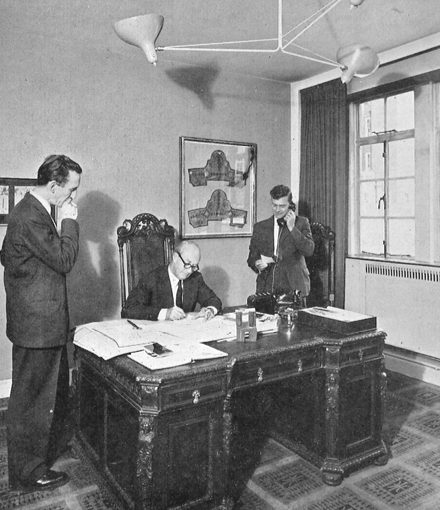 Farmer and Dark also designed a new lavish palace for the Sheikh Jabir Al Ali. There were many references to local patterns and decoration, and bold colours deployed to resist the strong sunlight. A series of hyperbolic arches forms a parasol over the main building, offering some shade to the structure below as well as adding a sense of grandeur and civic stature to the design. 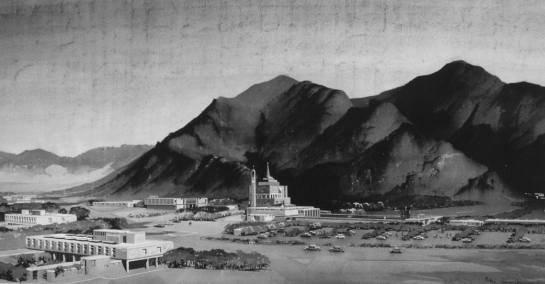 Perspective of the proposed town of Little Aden

The Church and Clock Tower at Little Aden, 1965

Church Interior, Little Aden, looking up into the lantern, 1965

Perhaps the highlight of this work is the British Army Cantonment at Little Aden designed and built between 1960-65 to house 4500 servicemen and their families. A small town was planned including a variety of different housing types for the various army ranks, as well as a school, sports facilities, cinema, clubhouses and a church. The entire town was designed around a modular system ensuring minimum site work, quick construction and standard details, as well as a progressive approach to data management and standardised drawing processes.

In stark contrast to the earlier reserved work the square timber trusses of the church are alternately stacked at 45° to the layer below to create a dramatic interior, as well as responding to the mountainous backdrop with its external form. It was a roofing technique dating back at least to the time of Vitruvius, who mentioned its use at Colchis. The church was subsequently converted into a mosque after the British were evacuated in November 1967 following attacks from the Front for the Liberation of Occupied South Yemen (FLOSY). The press speculated that the settlement was designed with Arab occupation in mind from the outset – a claim rejected by the architects who designed ‘for the conditions of Arabia and in character with the terrain, so the buildings are bound to be apt for other use, than by the British army’. The arrangement of the church sited on a rocky spur of the Jebel, ‘not only proves to have an affinity with the stone forts of South Arabia but also to the traditional relationship of mosque to minaret.’ Indeed, the architects considered the possibility of the church being converted into a mosque in the event of the British departing.

There’s a lot more to discuss about Farmer and Dark, and the significant contribution made by people such as Bill Henderson to this practice. We hope to post a lot more images and details on the blog in the next few months to bring more of this work to light.

I’m extremely grateful and indebted to Tessa and Kathy Henderson for generously sharing their father’s archive with me.