How are we to build today in Ghana? What is our architectural syntax and how are we to generate form, meaning and qualities that somehow resonate with Ghanaians today? This is of course a difficult question, and not all architecture has to be reflective of the country in which it is built. Indeed, it is very problematic to think of architecture in terms of geo-political territories, especially when the architecture of the West is rarely presented like this. It is unusual to hear of architecture referred to as European, or Luxembourgian for example, but the architectures (and architects) of the global south are frequently labelled according to country or region of origin (Indian, South East Asian, West African for example – see http://blog.nus.edu.sg/seaarc/symposium/), furthermore when ‘modern’ architecture is produced in those countries it is labelled as mimicry, inauthentic, or somehow borrowed, imported, or not belonging.

This is the difficulty architects face when working in places like Ghana. However, architects must take a stance and adopt a position. They should be self-conscious of the designs that they are making, and conceive of a direction, or ambition for their work. There were two recent buildings that we visited in Accra that are attempting to deliver a new response to architecture.

One Airport Square  (designed by Mario Cucinella Architects) has gone for the attention-seeking approach. A complex façade composition made up of diagonally arranged structure with horizontal fins. The fins and ‘columns’ project from the building’s envelope by almost 2m, acting as a vast brise soleil they provide much needed shade, as well as absorbing heat externally whilst reflecting sunlight light into the building.

Atrium of Airport Square One

Internally there is a large atrium space that holds the circulation as well as bringing light into the deep plan and pulling fresh air through the courtyard. This kind of building works well when set amongst other less adventurous forms. It is also helping to create a new context for that part of Accra, and is distinctive enough to become a reference point and landmark. I just hope it doesn’t become part of a silly form-making game with each bank trying to out-do each other in the quest for the next distinctive shape. 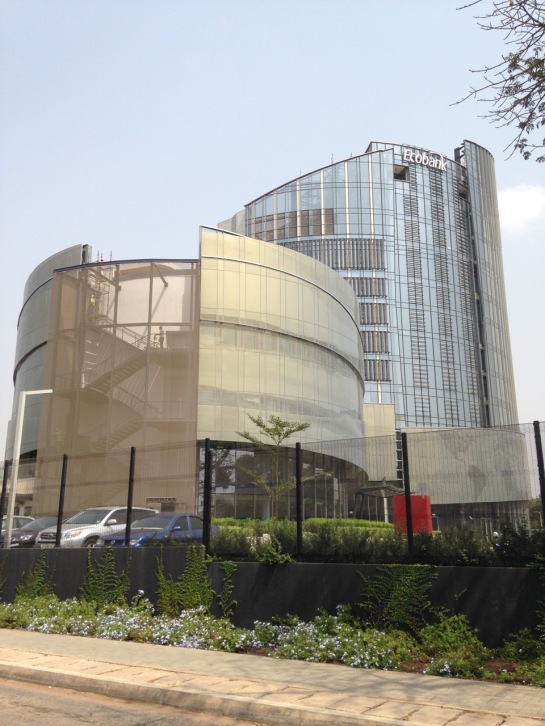 Another new building that has just reached completion is the vast Ecobank Headquarters located adjacent to the Efua Sutherland Children’s Park. This provocative building was designed by a consortium of Ghanaian and South African architects (http://arc.co.za/project/ecobank-ghana/), the local and site architects being Mobius, lead by KNUST graduate Augustus Richardson. A lightweight metal brise soleil is used to protect the glass façade where the sun strikes, and a perforated metal jali screen offers solar protection at the lower levels, as well as being used to depict a map of the world, and a larger drawing of Africa.

Augustus Richardson with the model of Ecobank

At ground level the building is clad with limestone firmly rooting it into the earth and forming tactile surfaces. The two forms reflect the public banking space, and the private offices of the bank HQ. The bank is orientated on an axis leading towards the concrete obelisk in Africa Liberation Square, and there is a real declaration of optimism in this building. Mobius are an exciting firm to follow, and Richardson kindly took us on a tour of the bank, giving behind the scenes access. The quality of the finish is exceptional and build quality excellent. Richardson clearly cares about architecture and his city; there is a charged excitement in the way he talks about design (see http://www.design233.com/oldhtml/works/augustus_richardson_the_bridge_mobius.html for more on this).

But what of the building envelope? Is it an appropriate response to design an almost entirely glazed building in Accra?

In 1957 Anthony Chitty gave the opening address to the new school of architecture at KNUST and posed this question,

‘Is a regional architecture, a truly African style, possible for West Africa; for Ghana in Particular? I believe the answer to this question is “yes” : not only possible but desirable, something to be striven for.’

In many ways the Ecobank is the perfect response to the clients wishes – they wanted a modern, international office space to reflect their brand, and clearly Ghanaian architects and engineers can deliver this type of work as well as anyone, but, if we are to be critical, are we guilty of what Chitty spoke about 60 years ago when he demanded,

‘Not just a pallid and mediocre edition of the international style, not just the half considered European solution trotted out to make do here, but a real and living architectural answer to your own local problems, social, technical and political, drawing the maximum from such origins as do exist here, a true Ghana aesthetic.’

I don’t think the Ecobank is at all mediocre, or half-considered, and Chitty was over-playing the Ghana aesthetic idea in light of the nationalist tendencies from the time-  but there must be an approach that can make the architecture of this region specific to this place. Other large projects are rapidly springing up (and unlike the Ecobank) they parade the hackneyed multi-coloured cladding approach that is tormenting every city, whereas Ecobank is clearly searching for something more.

The difficulty is how to scale-up ‘tropical’ design. Tropical architecture stems from the bungalow, barracks, and hospitals – it works well for small-scale low-rise buildings, as the Children’s Library, George Padmore, KNUST Senior Staff Club House demonstrate – it wants to be a ground hugging solution set within leafy gardens and evaporation pools.

A bank today however cannot rely on loggias and verandahs, and rising land values and the ability of buildings to generate substantial rental incomes stimulates the high-rise approach.  This was something that Fry and Drew encountered in West Africa. They worked for the Co-op Bank in Nigeria and placed louvres on the facades of multistory buildings, a technique also used by John Addo at Cedi House in Accra. The library at Ibadan presents another alternative – with its delicate screen and effectively double-façade-cum-circulation zone. Fry found the façade too ‘lace-like’ and pursued something more strapping and formal in later works, such as the library at Girls College in Chandigarh’s Sector-11. 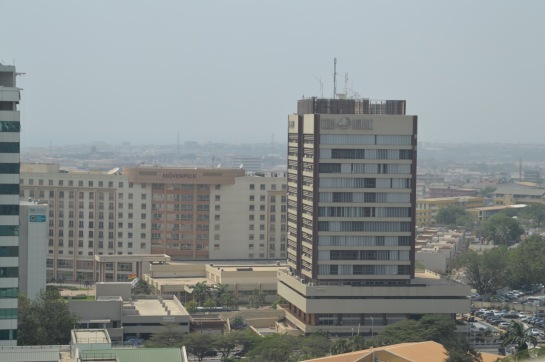 Fry also set himself the challenge of using a glazed façade in a hot climate, again in Chandigarh. At the Government Printing Press he used glass on the north facing façade only, and included adjustable louvres on the interior to reduce glare. The south facing façade was protected by the walkways and an external aluminium louvre system based on the traditional jalousie reduces solar gain.

There is perhaps just the germ of historical precedent in the two recent Accra buildings – and both reveal a confidence in the city, as well as an ambition to test this type of architecture. The next step will be to put some data-loggers into these buildings and to see how they perform. Their critics might be pleasantly surprised.